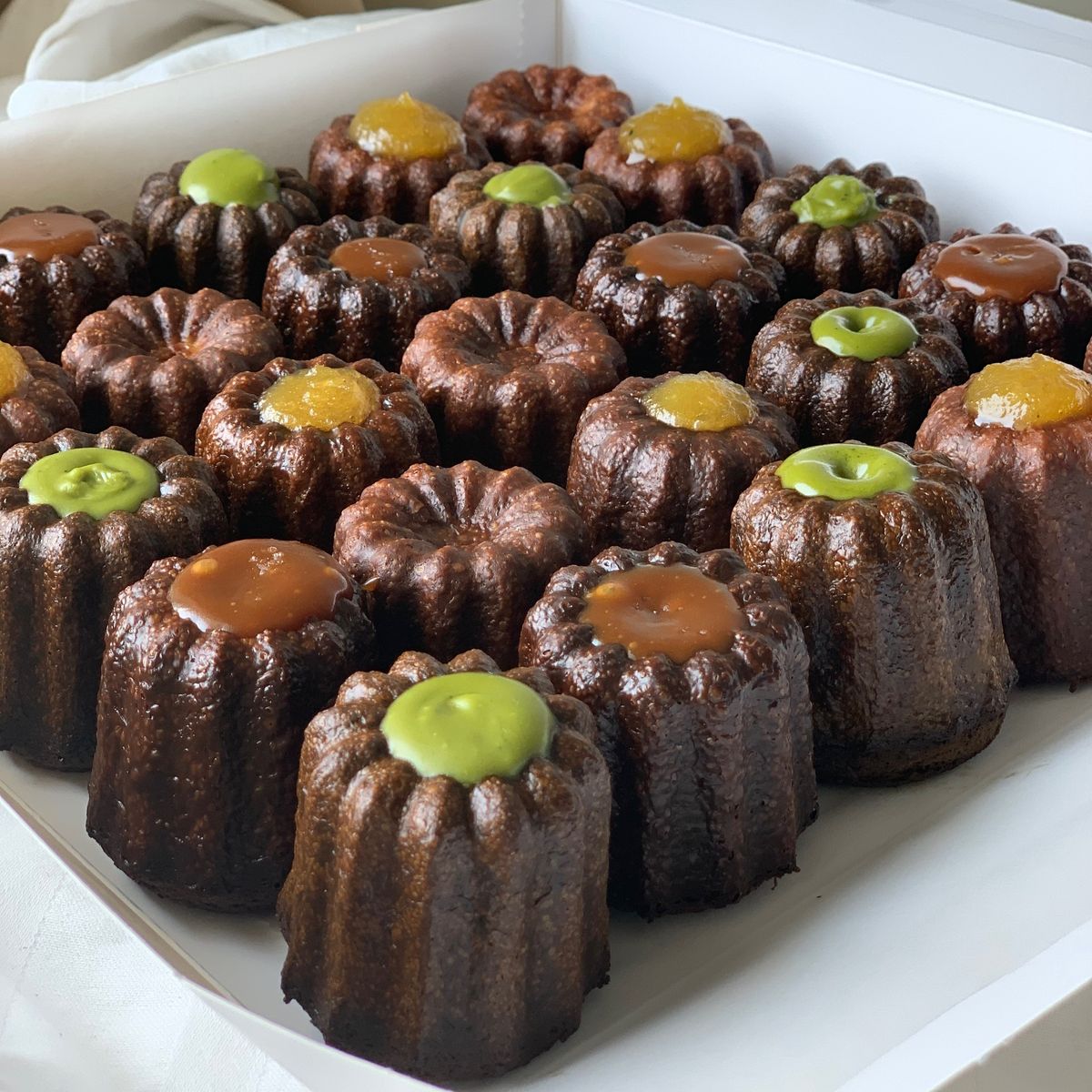 I honestly don’t remember when and where I heard about it but it was long before I went to Paris. My first taste of cannelé was in Adriano Zumbo, Sydney. It was interesting but it didn’t fascinate me. It was forgotten soon after!

While living in Paris, I used to love going to Pierre Herme for their macarons & tarts. He had a store on the same metro line as Le Cordon Bleu and I would go there after class or just before class. Mostly after class cause before class, I was busy running for the metro/bus! Lol. I stumbled upon cannelés again in his store on Rue de Vaugirard. It was a delightful experience.

Cannelés are so unlike any other pastry I have eaten. The contrast between crunchy, mahogany crust and smooth, custardy center is unexpected. Marriage of flavours of rum, vanilla & beeswax was truly exceptional. The beeswax lend a beautiful honey flavour to the cannelé.

But it was rare to find one in Paris back in 2014. Just before leaving Paris for good, I took a trip down south to Bordeaux (the land of red wines & the hometown of this fine pastry) to try Baillardran’s cannelés.

What used to be an underrated pastry now seems to be sprouting everywhere. Every other ‘patisserie’/cafe seems to have their version of it.

In my humble opinion, these are a few things that make a great cannelé.
1. Cannelé batter has to mature for at least 24 hours before baking. There’s no negotiation on that.
2. Cannelés have to have that deep amber crunchy exterior. No golden brown cannelés, please! The darker the colour, the better.
3. The custardy centre of the cannelés has to be like a set flan texture, never soft/mushy.
4. Cannelés are eaten at Room Temperature not fresh out of the oven/warm/hot. ‘Like you should never eat a creme brûlée straight out of the water bath.’ -Quoting a highly influential baker.
5. Cannelés should be eaten at least an hour after it’s out of the oven & within 5 hours of it being out of the oven.
6. Cannelés have to be baked in beeswax coated copper moulds. No oil spray/butter please! Cannelés baked in moulds coated in butter tend to have that unpleasant burnt butter after taste IMHO. Beeswax also helps ‘preserve’ the exterior of the cannelés from getting soft quickly esp for unfilled cannelés.

Why are Sucreebypreeta’s cannelés more expensive than the others?
1. I use a lot high grade vanilla beans in my batter. Vanilla pods are expensive.
2. There’s a lot of dark rum in my classic/dark chocolate/Fes fav cannelés.
3. All cannelés are baked in copper moulds and coated individually in imported food grade beeswax. My mom sources them from local Australian farmers and ships them to me. Raw beeswax + shipping cost.
4. All other flavours are made with high quality ingredients.
5. Cannelé moulds are filled to the maximum capacity of the mould.

If you enjoy true craftmanship and appreciate the effort taken into making one of the best cannelés in Malaysia, you're in for a treat!